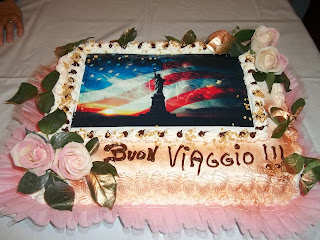 Arrivederci, Roma!
How blessed we have been to have this time of pilgrimage together in Rome!
Many thanks to our superiors and the sisters in our local communities who made this trip possible.


It is hard to put into words how blessed we have been to share this time together.
Certainly, we have a renwed appreciation for the CMSWR and the beauty of sharing together our lives consecrated to Christ. Time to say goodbye... 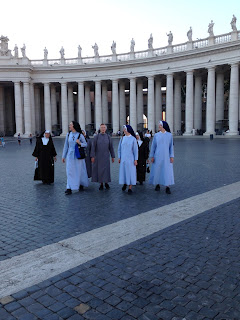 Day 22 Our Last Day of Pilgrimage in Rome
Our final day in the Eternal City provided us the opportunity for the unique privilege of a visit to the Sistine Chapel and a tour of part of the Papal Palace.  Our guide for the tour was Sister Melanie, a Felician Franciscan Sister, who works for the Secretary of State of the Holy See. 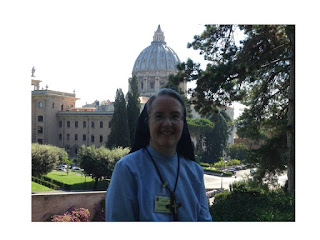 Thankfully, after these two big events of the day, we had some time …
Post a Comment
Read more 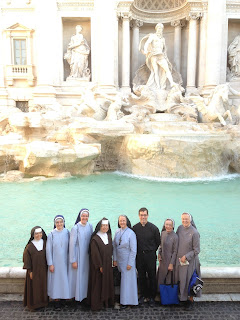 
We then visited Sant'Andrea delle Fratte, the site of the Apparation of our Lady to Alphonse Ratisbonne which led to his conversion and where St. Maximilian Maria Kolbe had his f…
Post a Comment
Read more 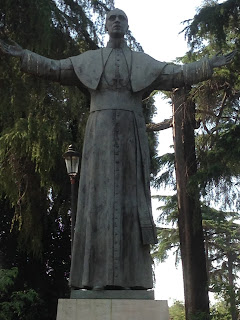 Today is Sister Mary Hanah's birthday, so we celebrated first by going to Mass at the Basilica of St. Lawrence Outside the Walls. The statue of Pope Pius XII commemorates the day he drove out to pray with the people of this neighborhood who had suffered from a bombing during the war (aimed at the railway, but damaging homes and part of the Basilica too).


It is difficult to give a sense of the Basilica, as each photo only shows one or two elements.


The tomb of Blessed Pope Pius IX is in the lower level.


As we left the Basilica, our first wish was to go to Saint Peter's for the Angelus and receive the Holy Father's blessing. After waiting a long time for the bus, we were informed by a young woman that a tram could take us there, although by a very long route. We thought we had nothing to lose -- this tram would at least take us to St. Peter's, where we could transfer to another bus and return home. But as our tram moved quite quickly through the neighborhoods, we began …
Post a Comment
Read more 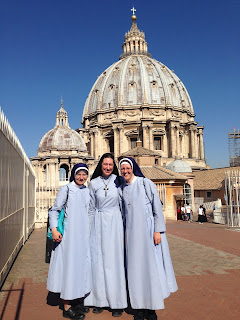 
In the afternoon, we visited the Basilica of San Clemente, in which photos are not allowed. From there we went to the Church of the Four Crowned Martyrs, where we prayed and studied the communion of the Saints as portrayed in the apse.
We were able to see St. John Lateran from the top steps, and were…
Post a Comment
Read more
More posts